“This is my chance to prove myself.”

Your friendly neighborhood Spider-Man is officially home in the Marvel Cinematic Universe! The young Peter Parker was introduced in Captain America: Civil War last year and his surprising appearance made fans hungry for more. This summer, the web-slinger swings back into action juggling his budding superhero career with a frantic high school life in Spider-Man: Homecoming.

Sideshow and Hot Toys are excited to announce the beloved sixth scale collectible figure of Spider-Man wearing his homemade outfit!

Expertly crafted based on Tom Holland’s appearance in the movie, the Spider-Man (Homemade Suit Version) collectible figure features a newly developed Peter Parker head sculpt as well as a masked head sculpt with 3 sets of interchangeable eyepieces for a variety of facial expressions. It also comes with a finely tailored outfit featuring web-shooters, an assortment of spider-web shooting effect parts, and a specially designed dynamic figure stand with movie logo.

Welcome Spidey home and add him to your Hot Toys collection! 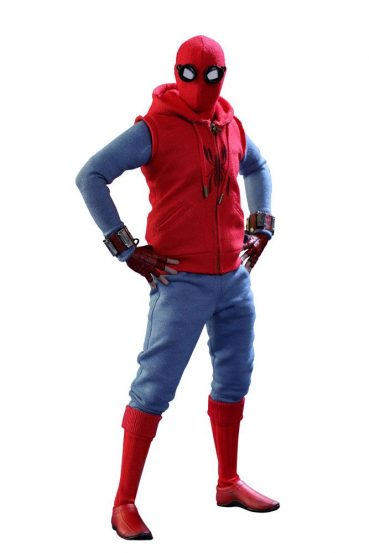